Jim left his native Doohoma on Blacksod Bay to go to University in Dublin at the age of 16. He qualified as a doctor, married and went to live in Belfast.

From Doohoma to Dublin and Belfast

Jim Henry was born in 1918 in Doohoma in Erris in the Mayo Gaeltacht, the eldest of seven children of Phelim Henry and Margaret Keane. The house in which he was born is still there, called the Sea Rod Inn. His father Phelim Henry was a strong man who had worked in coal mines in England and saved enough money to buy the building and a hotel licence. He was not afraid to fight for what he believed in and, among other things succeeded in establishing a cemetery in Doohoma to save the people from having to walk to Kiltane, several miles away, to bury their dead. The council proposed one in neighbouring village Geesala but Henry argued it was unsuitable, “a shaking bog that you wouldn’t bury a dog in,”  called on the men of the village and two days later 300 volunteers dug an acre of land, fenced it and got the bishop of Killala to consecrate it. These same men made a road into it.

Perhaps the community action that made the new cemetery at Doohoma back in the 1920s was an act of resistance. Phelim Henry’s graveyard was created around the children’s burial ground. It deliberately embraced the generations of stillborns, the suicides and the drowned strangers within its sod walls, bringing them into consecrated ground, as though Doohoma was reclaiming its dead from limbo.

Margaret his mother was a strong, generous woman. They had a shop attached to the pub and were the undertakers for the village. She had come to Doohoma from the Mullet peninsula to marry Phelim when she was only 16. Her sister Sarah came with her at the time to keep her company and went on to marry Phelim’s brother. This family was known as Henrys of the Ferry while Jim’s family were the Henrys of Doohoma.

Phelim died in 1946 and Margaret carried on the business till she died in 1966. She was helped in this by her son Phelim who predeceased her.

After her death, several people told the family how she had given them credit while their menfolk were away working in England or Scotland, and how generally helpful she was.

Jim was lucky at the Doohoma National School in at least one of his teachers,  the headmaster  Mr Holmes, who was a lover of books and all things Irish and a stickler for accuracy. Mr Holmes was able to tell him that the Irish form of their name Henry was actually O’hInneirghe and not Mac Enri which they had been using since a Land League advisor had suggested that this latter was their name. (This man from the Land League was a MacEnri himself from Galway which perhaps explained his position.) The Doohoma people pronounced the name Henery, as indeed it was spelt on some old land valuation lists and census lists and this was closer to the Irish.

He told the story of another teacher, originally from Kerry who was looking sadly out of the window at the miserable weather and who sighed, “Mayo God help us” and a bright spark in the class piped up, “And isn’t Kerry glad of it!” The teacher gave the boy a half crown – better than any gold star.

Jim then went to board at St Muredach’s in Ballina where he studied the usual curriculum of the time, including Greek and Latin. During his time there he often served Mass. He was a devout Catholic all his days.

He seems to have enjoyed his time at St Muredach’s and did not suffer any of the hair raising experiences that some boarders complain of, though he did tell stories of a certain priest who would search the boys’ pockets, presumably for contraband cigarettes, and how some of them took to carrying razor blades in their pockets to put him off.

His other brothers attended St Muredach’s too. And while one other brother became a doctor, another took a very different direction. (excerpt from the Erris Times archive.)

Last week he was flown over from England to act as sparring partner to Bruce Woodcock, British and Empire Heavyweight Champion, who is training in Galway for his forth coming fight with Freddie Mills, challenger for Woodcock’s two titles.

Since Cathal entered the “leather pushing” game he has gone ahead by leaps and bounds, and only recently he had a points decision over Frank Konayne, who defeated G McDermott, Irish Heavyweight Champion, in an unofficial fight in England.

As a boy, when he became a student in St Muredach’s College, Ballina, he possessed those physical qualities which gave promise of future strength. Always intensely interested in games and exercise, in a year or two he developed into a man of splendid physique, and was head and shoulders over his companions. At that early age he was gradually maturing into the mould of a boxer. With him in St. Muredach’s at the time was another brother, Harry who is now a well known footballer with the Belmullet club.

In the summer of 1944 Cathal left the college, and went to England and after some time took up boxing there.

He has never boxed as an amateur and one of the outstanding traits of the young Erris stalwart is that despite his great strength, he possesses an amiable disposition, which is an invaluable asset in his career.

The Galway boxing fans are very proud of the fact that a Mayo lad (24) figures so largely in the training scheme of the British champion.

It is expected that Cathal Henry will visit Ballina and Erris before he returns to England. He is now under the eye of Solomons, greatest of British boxing promoters, and that fact may mean big things in the Erris man’s future.

Cathal or “Charlie Henry from Ba-line-a” as he was sometimes announced, went to the USA and suffered a detached retina while sparring with Rocky Marciano and that put an end to his boxing career.

His brother Vincent contracted polio and was sent to the USA  for rehabilitation. There he learned about the dry cleaning process, and when he came back home, he opened the first dry cleaners in the West. He owned the Auld Triangle pub in Dublin where a lot of Mayo supporters meet before matches.

In 1934, at the age of sixteen Jim went to UCD to study medicine. It would be nice to suggest he always had a vocation but he said he decided to do medicine because when he looked round the people he knew, the doctor seemed to have more money and a more comfortable lifestyle than anyone else. This initial cynical approach did not prevent him from becoming a very caring and competent doctor.

The story goes that he did not attend a single lecture in his first year and became very fond of drinking. Like his other brothers, he was fairly sporty (though he never enjoyed watching sport on television)  and was asked to join the rowing team; it was all fine till he had to turn up for training and stop drinking. This did not suit.

He also joined the army training corps and enjoyed camping at Finnar.

He did his practical studies at Jervis Street Hospital and on his first day on rounds with a consultant, the senior man asked one of the students to give a woman an injection; the student had no training or experience and just stuck the needle in the woman’s arm. She flinched and gasped. The consultant said, “Madam, we’re doing our best for you.”

He had to repeat some exams but related how he turned up for one and the lecturer asked him what he was doing there. He explained how he hadn’t passed some course. The man said, “Well, you passed here, you’re wasting my time. Out!”

He must have gone to some lectures because he did eventually graduate in 1944. During the celebrations he lost his qualification scroll; he said he was never asked for it afterwards. Fifty years later, there was a reunion for the class of 1944 and they were presented with ceremonial degrees.

His brother Harry also studied medicine in Dublin but at the Royal College of Surgeons. When he was going up his father warned him that he was there to study and he’d better pass his exams because there’d be no more wasting of time and money like Jim.

Jim had spent his entire student life in one place in Baggot Street. He recommended it to Harry. Harry stayed one night!

This picture taken at Harry’s graduation suggests that it was a much more civilised affair than Jim’s and that he didn’t lose his scroll. 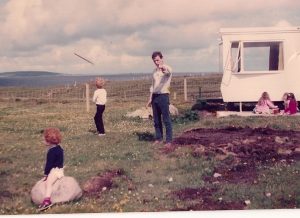 Jim met his wife May Wilson at a rag hop in Parnell Square. May was working in the Land Commission in Dublin and it was a matter of chance that she went to the hop. She was going out with a lawyer from county Down at the time but he was suffering from a crop of boils and so, on this occasion, May went to the dance without him. Rumour has it that Jim met her on the stairs and that his first words to her were: “Hello, my lovely little girl.”

Both men used to meet her off the Belfast train but Jim won his suit.

They married in University Church, Stephen’s Green in 1940. Jim was still a student.

When Jim eventually graduated, they went to live in Belfast with May’s parents.

He practised medicine there for a brief time, both on the Grosvenor Road and York Street. He was impressed by the hardiness of some of the women whose babies he delivered. When he’d call the following day, they’d have their sleeves rolled up and be doing the housework.

He made an impression on at least one patient. One day, many years later, he and May were walking through Queen’s Arcade in Belfast and a woman stopped him and recalled how he had waited with her for some hours suspecting that her condition would deteriorate which it did and she reckoned he had saved her life.

In the early 60s Jim obtained a further qualification, in public health, from Queen’s Belfast.

As the years went on and the family grew, Jim loved nothing better than to have the children and grandchildren together. Christmas and Easter were always special when the children tried to be in Belfast, if not on the actual day then close to it.

Jim loved to return to Doohoma to visit his relations. He bought a mobile home and parked it at Doohoma Head where his family used to cut turf. When clearing the site, he left a big stone in situ because one of his grandchildren used to sit on it and called it Bobby.(His brother-in-law, Peter Brady had a real donkey called Bobby.) His neighbour, Anthony Gaughan looked after the home well in Jim’s absence.

Jim Henry’s wife May was from East Belfast, as different from Erris as day from night.

Her childhood holidays had been spent in County Down a far cry from the fierce Atlantic coast of Mayo. But she was interested in the Mayo people and often wondered how they’d come to be living in such a place. When her son Edmund asked his Grandmother how the Henrys ever found Doohoma, Margaret Henry’s answer seemed like a fairy story, an ancient myth. She said that in far off days, the Henry family had had to leave their own place and they followed a black bull and wherever the black bull stopped was where the family put down roots. It turned out that her version, though simplified, was not that far from the actual history. A chance meeting on Doohoma beach opened up the story further.